The trials of a modern day Cinderella

OMG, what am I going to wear?

Why is this the first thing we think of when something truly awesome has just happened?  I had just got the message that I’d been chosen as finalist in the Miss Australia International Pageant. Me! I was Cinderella and I was going to the ball – I couldn’t believe it! My head started spinning from the millions of real and imagined miracles and mishaps waiting along the way before I’d be clambering into my crystal carriage.  I needed a plan.

My immediate dilemma was overcoming five-thousand years of “demureness conditioning” we Chinese girls have tattooed on our DNA which prevented me broadcasting my fabulous news. Ha! no problem there, much too excited. Straightaway on the phone telling my friends who quickly echoed the same challenge: ‘What are you going to wear, Tiffy?’  Not that any girl ever needed an excuse to shop, but this seemed much too good to pass up. So, after a discussion over Yum Cha about what a Pageant Finalist might need, we set off with a vengeance and a fully loaded credit card to do the Pageant Finals proud.

Like kids in the proverbial candy store, glamour photographers, jewellery stores and shoe shops passed in a euphoric blur. And especially boutiques – what girl doesn’t dream of that perfect knock-your-socks-off dress that sucks the oxygen from the air as you pass by open-mouthed adoring fans. I knew I’d found the perfect one, something Marlene Dietrich would have worn in a cabaret performance of Lili Marlene. I slipped it on. 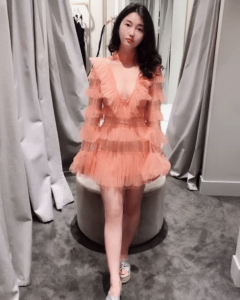 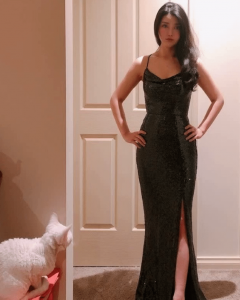 ‘Mirror, mirror on the wall, who is the fairest…’ But as I paraded around, I knew.  Or maybe that mirror was a reject from the fairground’s amusement arcade, as well as from the wrong fairytale?  Unfortunately, the look in my girlfriends’ eyes confirmed the awful truth. I’d need to dust-off my gym membership, get the spring back into my step and improve my body language if I was to change my life; this beautiful green dress I was willing to die for was just a mite too clingy where it shouldn’t be and if I was going to wow any Pageant in this little number as the real me, let alone enchant a Prince should one make an appearance; I’d need to look like I owned this dress, not the other way round. Something else to add to my to-do list that was rapidly overtaking the list my mum would write for an assault on the supermarket aisles.

My next problem was talking. The machine-gun speed of my birth language, Mandarin, wasn’t going to get me far outside Little Bourke Street’s Chinatown restaurants or Box Hill’s vegetable market. When I arrived here in 2013 with a smattering of English, I had energetically set about mastering the language. It became abundantly obvious now that dazzling anyone with my faultless and clever prose, let alone leaving the Pageant judges themselves in awe of my repartee, was desperately in need of some work.

Yes, you guessed it, a speech coach was urgently required.  Someone who could teach me to captivate and enthrall my audience with a masterful verbal performance as I controlled the stage like an opera diva, hopefully in my green dress.  How am I doing so far? Just so-so on both fronts but improving. We’ll see how far I get towards those goals by February. Surely Cinderella never had these problems…

I soon discovered the road to “Pageant Princessdom” isn’t a yellow brick one either. Ferial, the Pageant’s Director and “stage-mother”, slapped another to-do list on me, making my earlier one look more like a post-it note; I realised us potential princesses would have to earn our stripes, er…crowns.  But I’ve always been passionate about causes I believe in, now the Pageant was giving me the opportunity to be a voice for those who don’t have one, so I wasn’t going to waste a moment because these beautiful children deserve no less.

Again, I rounded up my spendthrift friends and organised some fund-raising at child-care centres, street markets and BBQ’s, for my favourite charities – The Westmead Children’s Hospital and The Sunlight Foundation which is a very special organisation for me that funds the rescue of children from the sex traffickers in Cambodia. I’ve lots of fun events planned over the next few months, so keep watching! 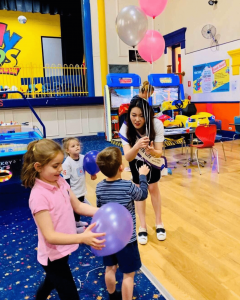 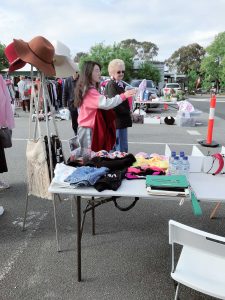 I’d never really gone out into the world as the centre of attention before, being quite traditionally Chinese, but there is something very empowering, not to mention exhilarating, about wearing the “Miss Australia” sash over my shoulder and representing what the Pageant and I really believe in. I highly recommend the journey. I was overwhelmed by the generosity and friendliness of people wishing to support what I was doing. I am still “cutting my teeth” to be honest, and take a few deep breaths sometimes, but I’m starting to feel much more confident to reach out to more people to support my cause.

The Miss Australia International Pageant is already changing my life, but much more importantly, I believe I can begin to change the lives of others much less fortunate than me and begin to give them the voices they deserve.  I’m so looking forward to February 2020, and meeting everyone!!